This past Saturday, the kids, community members and mentors that make up the S.A.R.E.P. Youth Fly Fishing Program met with our good friend, Mr. Steve Welk from Whispering Pines Hatchery, to introduce brook trout spawners into Canadaway Creek. We have heard reports passed down through the generations of family members catching brook trout in the stream but brook trout have not been found in the stream for close to a century due high water temperature, agriculture, riparian condition, one or more non-native fish species, urbanization and acidic deposition. Brook trout populations have been eliminated or greatly reduced throughout almost half of their historical habitat in the eastern United States according  released assessments by Trout Unlimited and a coalition of state and federal agencies. The report says brook trout populations remain strong in only 5 percent of their historical habitat in the eastern United States.

In 2006, S.A.R.E.P. Youth Fly Fishing program made a large investment to try to rectify the situation by purchasing 265 gallon tank, stand, chiller, pump and filter and place it in the Mr. Dan Lawrence’s science room. We got eggs donated from the Department of Environmental Conservation (DEC) hatchery in Randolph and we began to raise brook trout in the classroom. The following year Canadaway creek had brook trout in its waters for the first time in around 100 years. Over the years we learned a great deal about the fragility of this trout species and difficulty in raising them in a classroom. As the program continued, it became clear that we needed professional help and that we need to supplement the brook trout we were raising if we wanted to try to create a strain of brook trout that could survive in Canadaway Creek. Ever since then we have worked closely with Mr. Steve Welk.

Over the years we have tried to introduce around 400 six to nine inch brook trout in the spring and an additional 100-125 larger brookies in the fall that are ready to spawn. We have also worked closely with the DEC and have electro-shocked the stream during the warmest months in the summer to find where the brook have survived. Thanks to their efforts, we have been able to find the coolest spring waters with a thick canopy in fairly inaccessible locations that is best suited to support the introduction of the these trout. With the support of the Orvis, Patagonia World Trout Fund, Dreamcatcher Foundation and private donors, we have been able to continue our educational and conservation programming. 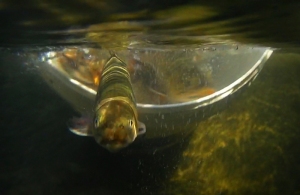 These are some of the images and short video (one minute) from our recent trip to introduce some new spawners into the stream.