This weekend was a momentous occasion. The above image of a healthy fifteen inch brook trout caught by an angler of Canadaway Creek reflects what a DEC biologist feels could be a brookie that has returned from Lake Erie!

The biologist felt that the fish caught in the lower section of the stream, about two miles from Lake Erie, was too healthy and well fed to have been in the stream since October. October was when our SAREP/4H Youth Fly Fishing Program had put in brook trout in the upper sections of the stream around eight miles from where the fish was caught.

History of Brook Trout Reintroduction Efforts
When I first moved into the area in 1989, I had heard old timers mention how their fathers used to catch brookies in Canadaway Creek. Brook trout (actually a char) are the only true native trout to the Northeast and have been in its streams since the ice ages. (The brown trout came from Germany and the rainbow Trout came from the Northwest and both were distributed throughout the United States in the late 1800s.)  Brookies are the most fragile of these trout species and are the first to feel the effects of high water temperature, agriculture, riparian condition (erosion/sedimentation), competition from non-native fish species, and urbanization. These factors have greatly reduced or have eliminated the brook trout in nearly half of the watersheds in their native range. The vast majority of historically occupied large rivers no longer support self-reproducing populations of brook trout.

In 2006, The SAREP/4H Youth Fly Fishing Program started reintroducing brook trout into Canadaway Creek after not having brook trout in its waters for over a hundred years. The efforts were first funded by sales of flies tied by the youth from the program and by donations but a few years ago, the Brook Trout Reintroduction Program was funded by Doug Manly and Patagonia’s World Trout Fund. With the support of the DEC’s electroshocking efforts and the Whispering Pines Hatchery, we have been able to refine our stocking practices to match the hatchery’s cold water temperatures by distributing the fish near springs in the headwaters, by introducing the fish after fishing season and by purchasing older brook trout who were ready to spawn as soon as they entered the stream. These changes reflected a more effective use of our funds and energies  and dramatically improved the brookies chance to reproduce and prosper. Our hopes has always been to create an opportunity for the fish to survive and reproduce in Canadaway. We hoped that one day they could survive the trek into the lake and then return to spawn.

The image at the top of one of the two brook trout landed is a very small sample of evidence but when it is added to electroshocking fish surveys and other anecdotal evidence over the years from fisherman, the overall picture is encouraging that the SAREP/4H Youth Fly Fishing Program’s efforts have made a positive change in having brook trout survive, prosper and swim again in Canadaway Creek.

Here’s a new video on this past summer’s trip to Yellowstone Park with good friends, Bill and Chuck from Pittsburgh, and my son, Diego. Those trips enrich my everyday life for the rest of the year as I think back on those special times in a spectacular location.

Here’s a link to the Orvis site and of the picture they selected as the picture of the day.

The images was taken on a local stream on a wonderful day of leisurely fishing with a friend. 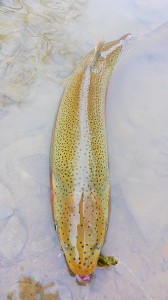 While on a recent guide trip, I found this odd looking creature that was later confirmed as a mudpuppy. The common mudpuppy is a species of salamander in the genus Necturus. Fall breeding activities take place in the shallow waters of lakes and streams at depths ranging from only decimeters to several meters beneath rock slabs, logs, or planks. 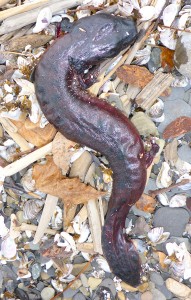 My son, Diego, and I have been investigating the many canals and lakes in the Miami area and our guide has been

Arnold, an old steelhead client and friend who retired after working 34 years for the Miami Herald. He is presently a fishing columnist for the Waterfront Times in Fort Lauderdale, FL.

Here’s a new video from last week’s trip to visit my folks in Miami, Florida.

In the summer of 2014, my thirteen year old son and I met two old friends from Pittburgh and we flew out to Montana to fish the West and East Fork of the Bitterroot River as well the rivers in and around the Lamar Valley in Yellowstone Park. The following link on Gaia GPS  shows you everywhere we we went on the road and in the stream with a few photos to mark special places we encountered.

The following video documents our adventures on the West Fork of the Bitterroot River. It was our first trip to this river but by the third day we were experiencing moments that would become life-long memories.

The Weather Channel will airing “Strangest Weather Series Two” again in October and Episode 6 will include a clip from my ‘Pancake Ice on a Great Lakes Tributary’. The footage will be interlaced with eye witness accounts, expert interviews and demonstrations of weather phenomenon. The series is produced by Pioneer Productions, a TV production company based in the UK where they currently are working on the weather series for a major US broadcaster and international distribution.

While visiting my folks in Miami, I found this pod of tarpon and began to film.

What happens next almost gave me a heart attack and I was, just barely,  able to hold on to the camera.

This also gave me the opportunity to use this wonderful fun song.

This past September, I was a able to take advantage of a week of no rain to take footage of the first pod of steelhead that moved in to the local streams. This promises to be one of our better years, as steady precipitation has arrived early and fish are found throughout the streams.

I think you’ll enjoy this 7 minute video providing a rare opportunity to see clearly how steelhead behave in a shallow pool.