Here’s an image of lamprey in Canadaway Creek in June 2011 and here’s a movie of the same lamprey.

During the past two centuries, invasive species have significantly changed the Great Lakes ecosystem. In turn, the changes have had broad economic and social effects on people that rely on the system for food, water, and recreation.

An “invasive species” is a plant or animal that is non-native (or alien) to an ecosystem, and whose introduction is likely to cause economic, human health, or environmental damage in that ecosystem. Once established, it is extremely difficult to control their spread.

At least 25 non-native species of fish have entered the Great Lakes since the 1800s, including round goby, sea lamprey, Eurasian ruffe, alewife and others. These fish have had significant impacts on the Great Lakes food web by competing with native fish for food and habitat. Invasive animals have also been responsible for increased degradation of coastal wetlands; further degrading conditions are resulting in loss of plant cover and diversity.

Sea lamprey (Petromyzon marinus) are predaceous, eel-like fish native to the coastal regions of both sides of the Atlantic Ocean. They entered the Great Lakes through the Welland Canal about 1921. They contributed greatly to the decline of whitefish and lake trout in the Great Lakes. Since 1956, the governments of the United States and Canada, working jointly through the Great Lakes Fishery Commission, have implemented a successful sea lamprey control program. 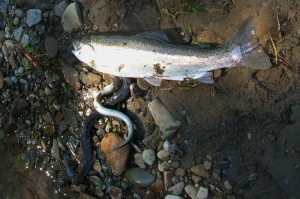 Here’s two lampreys on a steelhead at the mouth of Canadaway back in 2006. 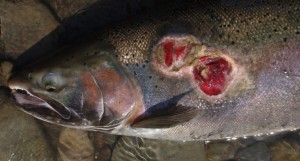 and here’s the results of their destruction on the fish that survive. Image from June 2011.